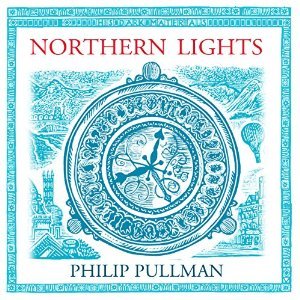 What Lyra likes best is “clambering over the College roofs with Roger the kitchen boy who was her particular friend, to spit plum stones on the heads of passing Scholars or to hoot like owls outside a window where a tutorial was going on, or racing through the narrow streets, or stealing apples from the market, or waging war.”

But Lyra’s carefree existence changes forever when she and her daemon, Pantalaimon, first prevent an assassination attempt against her uncle, the powerful Lord Asriel, and then overhear a secret discussion about a mysterious entity known as Dust.

Soon she and Pan are swept up in a dangerous game involving disappearing children, a beautiful woman with a golden monkey daemon, a trip to the far north, and a set of allies ranging from “gyptians“ to witches to an armor-clad polar bear.

It has taken me years to get to the end of this book. Literally. And I mean literally literally.

I first started listening to it on a long drive back in the winter of 2015. I added a bookmark at the end of chapter 7 and then it wasn’t until over a year later that I picked it up again. That time I only got to the end of Part 1. Another year later (the latter half of 2017) I decided it was time to give it another go. I was determined to listen to the whole trilogy.

I don’t think my disjointed listening was a result of me not enjoying the story, but it was slow paced. Lyra’s irritating lack of correct grammar was also putting me off. The action doesn’t really kick in until Part 2 (at least clearly not enough action to keep me hooked). It only took me about a month to get through Part 2. At the time of writing this I am less than an hour away from finished the next book.

I am now (and maybe I wasn’t in the beginning) a big fan of cast performances of audio books. It gives the story a more dynamic listening experience (which is important when listening on long drives and trying to stay awake).

An awful lot happens in this first book, but it clearly didn’t happen at a pace that kept me interested. Lyra covers an awful lot of ground and the story therefore allows itself to be put down each time she moves on to the next place. You have some resolution so you stop listening ready to tune in next week. Or next year in my case.

Maybe if I had been reading it I would have finished it sooner? We will never know.

In short. Didn’t hate it. Didn’t love it. Did like it enough to keep going with the trilogy.

This review is also featured on Goodreads.